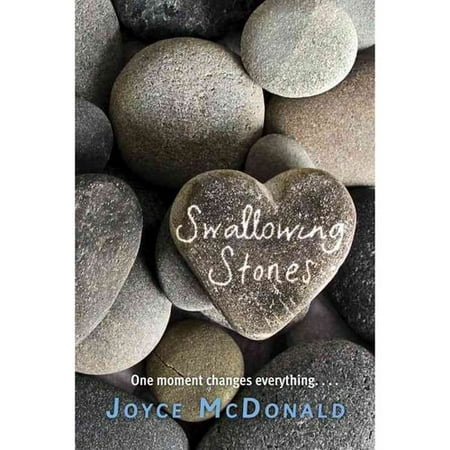 Review by Mya.T
Swallowing Stones is a heartwarming book about a teenage girl named Jenna and a teenage boy named Michael. Jenna was calling her dad, who was fixing the roof, to come in for lunch. He was about to come down until a bullet flew into the back of his head killing him. Earlier on Michael was in the woods and had fired off his Winchester Rifle with his best friend Joe not knowing that it was his bullet that had killed Jenna’s father. When Joe and Michael found out Joe said to cover the whole thing up so that they didn’t go to jail. During this time both Michael and Jenna go through a hard and emotional time through the case.

For my project, I made a few diamond’s fit inside a bigger diamond with 10 equations. It should look like this. ”Stomp,Stomp” I could hear as ran as fast as I could to my moms car! We had just bought my sisters bonus box at the mall. It was a long drive back to the house I was helplessly daising looking at the clouds. When we got to the house I ran inside. My mom said” let’s hide her gift where she can’t find it and give it to her on her birthday .”. I thought that was a great idea.So we decided to hide it in my mom’s bedroom on tho top of the shelf in my mom’s closet. Then the next day my mom and I said to my sister” Happy Birth Day!”. I handed her the present it was a big,cute,pink hello kitty and she had a big smile and gave me a hug and said” I love it because you thought of it.”. Then I learned that its better to make someone happy other than your self.